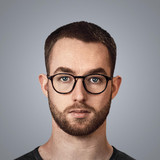 Many years spent within the Electronic music industry have seen PRCHT being supported by some of the scene’s heavyweights. From 2011, the Swiss producer has officially released more than 50 records under different names. With a wide and deep diversity in his inspirations, PRCHT’s records can feature elements coming from several horizons. His attraction to Electronic music goes back to the mid-2000s, when modern references used to break into the mainstream music scene. The Swiss’ curiosity then led him to computers and their virtual DJing and production softwares. The development of Electronic music gave birth to many projects, like a pioneer blog that PRCHT joined in 2011 and wrote articles for. Under the impulse of Belgian, French, American and Swiss colleagues, he expanded his knowledge and discovered some artists who are now attending the biggest stages in the world. PRCHT started the development of his own music at the age of 16. The first releases came in 2012, later followed by dozens of others. Many noticeable labels based in Europe started trusting his work and released songs wearing one of his pseudonyms. He also had the chance to perform in Switzerland’s ‘Best Big Club’: D! Club (Lausanne). Producing under Logic Pro (now X) since 2011, he does not follow any precise rule in any production process. The philosophy behind this is to develop what comes at the time being, without being too influenced by pre-established production processes.