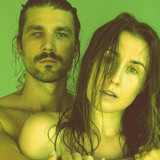 HOUSE OF SAY is an upcoming act you really should keep an eye on! Their first single ”Ghost” and ”Money” has received attention as Gaffa Star and rotation on Swedish Radio P3 . They also won the Swedish Radio contest P4 Nästa Gävleborg with the song "Know It” that urges for the strengthening of women and girls, the right to their own body and the end of violations of all kinds.    HOUSE OF SAY, a writer & producer duo from Sweden. They write music in a little cabin in the woods of the Swedish countryside Hälsingland. "That's where our name derives from. It's a HOUSE where we write music about things we wanna SAY."