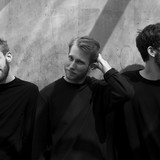 “Of all of heavy music’s myriad combinations, one of the most elusive yet compelling marriages of style lies in the rare crossover between sludge-laden stoner rock and cerebral, virtuosic progressive metal. Though the hazy grooves and old-school stylings of the former are often tediously straightforward, and the mathematical precision and lofty concepts of the latter tend to lack grit and passion, something truly interstellar is achieved when a mutually outstanding combination of the two is reached. In the modern metal arena, few have achieved such an engaging, pulse-pounding mixture of earthy fuzz and cosmic adventure as Norway’s Astrosaur, an outfit pushing their unique combination of sludge, prog, post-metal, and a hint of jazz into uncharted aural territory.” Invisible Oranges Astrosaur from Oslo, Norway have been playing heavy instrumental rock music since 2014. The band released their first album ‘Fade In // Space Out’ in 2017 and have since toured with Ihsahn and Leprous. In 2019 Astrosaur signed with Pelagic Records for the release of their second album ‘Obscuroscope’.