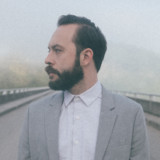 A lot has changed for Cereus Bright and for Tyler Anthony. As the band he founded a decade ago quietly wore down, the Knoxville, Tennessee-based songwriter took a step back from the project and re-evaluated his relationship with music. Deciding that the best path forward―if there was to be one at all―would be as a solo artist, pursuing a more fluid and personal version of creativity. Part of Anthony’s re-emergence as Cereus Bright involved removing himself from the rigors and valleys of professional musicianship, writing songs as he’d first done - in the margins. The result is his new LP, Give Me Time, a patient, breathtaking work that intimately explores Anthony’s flaws and rough edges, his triumphs and maturation. Anthony looked deep into his past, wrestling with his deeply religious upbringing, the complexities of modern society, and the idea of giving up on his dream. “With Give Me Time, I wanted to look back and look in,” Anthony explains. “I wanted to find some sort of generosity, not just defaulting to anger or cynicism. Honesty became very important to me. In life, good things happen and hard things happen. I want to explore both of those places and everything in between.” - Will Schube Give Me Time arrives May 28th, produced by Thad Kopec and Juan Solorzano.