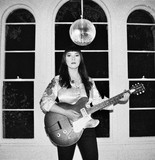 Formerly a backing singer for alt-J, Florence + The Machine, Roots Manuva, and still on tour with The Heavy, Lo Barnes is working on her own music machine with producer and partner Toby McLaren. This project began in 2015 with a 5 track demo that scored her a load of gigs across London and a play from Tom Robinson on the BBC Introducing mixtape, and in 2017 they moved to Bath and set up a studio with their bandmates from The Heavy. Shelve her next to Patti Smith, PJ Harvey, and Feist.