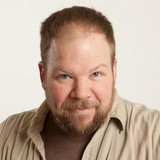 Corey Koehler (pronounced KAY-ler) is a musician who’s path to singing and songwriting is reflected in the title of his first CD, Never Too Late. Around the age of 35, Koehler finally decided he wanted more than he could wean from a nine-to-five job. He picked up his guitar, which he hadn’t touched in years, and discovered not all was lost. Something about the music gave Koehler the fulfillment he was searching for. His singing ability was an accidental discovery. Though he always enjoyed belting out songs along with the radio, it was his friends who encouraged this talent. Koehler would grab his guitar while sitting around a campfire to entertain an audience of friends. Compliments on his vocals became so frequent he started to believe maybe he possessed genuine talent. Koehler’s insight is present in his Americana originals in each of his first two albums, Never Too Late and FM. Lyrically, his subject matter relates to anyone who finds themselves weary of monotony in the daily grind, inadequate in choosing words to express compassion over loss, and an active participant (eventually, anyway) in the failure of a relationship. Musically, he makes you want to raise a beer and toast yourself for making it this far.