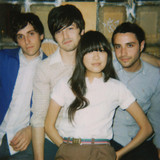 The Pains Of Being Pure At Heart

Featuring The Pains Of Being Pure At Heart

New York group the Pains of Being Pure at Heart started out following the classic indie pop formula of pairing romantic, hooky songwriting with neurotic fuzz guitar. Principle songwriter, guitarist, and vocalist Kip Berman's particular knack for complex melodies and emotionally resonant songwriting helped the band stand out, and they evolved from scrappy noise pop beginnings to slicker, stadium-ready production by the time of their fourth album, 2017's The Echo of Pleasure. New York-based musicians Alex Naidus (bass), Kip Berman (guitar/vocals), Kurt Feldman (drums), and Peggy Wang (keyboards/vocals) came together to form the Pains of Being Pure at Heart in 2007. They began as a low-key affair, writing short songs inspired by the fuzzy pop of My Bloody Valentine or Black Tambourine. Their first show was at a private party for Wang's birthday, playing five songs with a pre-recorded drum track. Their earliest songs were recorded for a self-titled CD-R on Cloudberry Records, followed soon after by a self-titled EP on the band's own Painbow imprint. In 2008, the group released a number of limited-edition split singles on Atomic Beat Records and Slumberland. Their first album, The Pains of Being Pure at Heart, was released in February 2009 on Slumberland, and the good reviews and positive press (including a spot on Late Night with Carson Daly) made them one of the most talked-about bands of early 2009. After the release of the summer 2010 single Say No to Love, legendary producers Flood (Smashing Pumpkins) and Alan Moulder (My Bloody Valentine) were hired to give the band a slicker, more powerful sound. The resulting album, Belong, was released by Slumberland in March 2011. After touring their second album, the Pains of Being Pure at Heart returned to the U.S. and Berman began writing new material for their third album. With the departure of original keyboardist Peggy Wang and bassist Alex Naidus, Berman brought together a refreshed lineup -- which featured A Sunny Day in Glasgow's Jen Goma and brass player Kelly Pratt alongside Feldman -- to record the album with Andy Savours (My Bloody Valentine, Sigur Rós). The resulting Days of Abandon was produced by Andy Savours and released in 2014 by Yebo Music. The group's next record was produced by Savours again and featured Berman handling most of the music himself, though Goma contributed vocals on many songs and touring bassist Jacob Danish Sloan helped out too. The sound of the album was heavily influenced by '80s new wave and pop, while the lyrics largely dealt with Berman's impending fatherhood. The Echo of Pleasure was released by Painbow Records in September 2017. In November 2019, Berman announced the band was no more. He continued writing and releasing solo songs as the Natvral, a moniker he had taken up shortly before the end of Pains. ~ Tim Sendra, Rovi