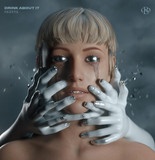 ISSUES is one of the 22 Artists Shaping the Future of Rock, alongside Foo Fighters, Twenty One Pilots, and Fall Out Boy, according to legendary tastemaker Kerrang!. Artist of the Year, Best Vocalist, Best Live Band (AltPress), and Best New Talent (Revolver) winners and nominees, the celebrated Atlanta quartet deliver on the swelling momentous hype with their third genre-bending album, Beautiful Oblivion.   Soulful R&B hooks, neo nü-metal bounce, prog-rock smarts, and active rock might swirl together in passionate ceremony, bridging the gap between the theatrical shimmer of The 1975 and the heavy syncopation of Meshuggah with energetic ease. Hints of classic funk, jazz-fusion, and modern pop-rock swagger weave between pulsating rhythmic punch and guitar driven riff rock, without a moment of incoherence. ISSUES have mastered the art of the mash-up, a genre unto themselves.   Roughly three years before the release of Beautiful Oblivion, Headspace was the Number 1 Alternative Album in North America, following on the heels of the band’s self-titled debut, which cracked the Top 10 on the Billboard 200 in February 2014.   ISSUES put literal blood, sweat, and tears into the creation of Beautiful Oblivion. Each of the 13 songs represents a different facet of the band’s unique musical identity. The album was made with multiplatinum Grammy Award winning producer Howard Benson (My Chemical Romance, P.O.D., All-American Rejects).