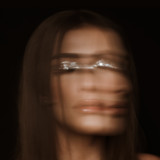 It is NJOMZA’s diverse background that allows her to shine bright. She was born in Germany to Kosovar-Albanian parents and grew up in Chicago. NJOMZA gained notoriety after Mac Miller caught one of her uploaded YouTube covers, promptly signing her to his REMember Music label. Settling in Los Angeles, she cameoed on “Planet God Damn” from Miller’s acclaimed 2016 offering, The Divine Feminine. Thereafter, NJOMZA unveiled her acclaimed debut EP, Sad For You, in 2017 which received early praise from the likes of Noisey, Complex, Pigeons & Planes, Office Magazine, and more. In 2018, NJOMZA inked a deal with Motown Records and released her second EP, Vacation. 2019 saw NJOMZA embark on her first-ever U.S. headline tour, in addition to touring with “3 Nights” hitmaker Dominic Fike overseas. She also made her festival debut at New York City’s famed Governor’s Ball, performing on both the Honda Stage and the Bud Light Dive Bar Sessions Stage, followed by a performance at Albania’s Sunny Hill Festival. Most recently, NJOMZA is recognized for her songwriting work on Ariana Grande’s GRAMMY-nominated thank u, next album. NJOMZA’s total career streams have surpassed 50 million. She is currently in the studio putting the finishing touches on her full-length debut album.