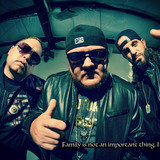 I4NI are leaders of the AmeriFlow musical movement, a genre that is out to blur the lines of musical lines between country, rap, and rock. They rose from the ashes of the hip-hop group C.W.B, better known as "Crazy White Boys" And were founded by Stump and D-Ray with the help of frequent collaborator Bubba Sparxxx who frequently joins the group on the road. Producer/singer Jon Conner was the final missing piece that completed I4NI. Conner was an accomplished producer in the country rap scene, having breakout success as the producer responsible for Big Smo's now classic album "Kuntry Livin". With Jon Conner in the fold, I4NI was able to solidify their signature sound. I4NI found a label home at Thirteen Skulls Entertainment. The Nashville based label was founded by music industry veteran Ron A. Spaulding and Major League Baseball Hall of Famer Frank Thomas with the vision of letting musicians be creative without the constraints that often impede them. For more information please visit www.thirteenskullsent.com and www.i4NiNation.com