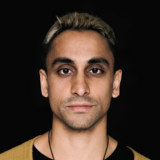 Raised on three different continents, ShiShi's music reflects his global citizenship, blending sounds and influences from all corners of the world and showcasing his Indian musical heritage.

In 2019 he played his largest show to date at Terminal 5 (New York City) to over 2,000 people and released his debut self-titled 12-track album, earning the cover spot on Spotify’s official “No Borders” playlist.