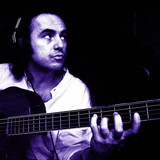 I'm an Argentinian multi-instrumentalist, arranger, and composer. I've been performing and recording as session musician, arranger, producer and musical director for 30+ years, in styles ranging from jazz and rock, to experimental electronic music, tango and other styles of Latin American music. As a solo artist, from 1995 to the present I released a lot of music, both independently and by prestigious labels in the US and Europe: 18 instrumental solo albums, 10 EP and many

singles. My online catalogue (Spotify, Apple, etc) includes, as on January 2021, 612 compositions, recorded solo or in collaboration. Since 2005 I've been working for some of the finest music libraries and publishers in France, the United States, UK, Germany and Canada. Over 590 of my production music compositions (films-TV) have been placed in documentaries and film.More info: www.dedeland.com