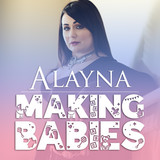 Alayna left the small town of Butler, Pennsylvania in the summer of 2011 with nothing but herself and a carload of a few necessities, including her Breedlove guitar, to pursue her lifelong dream of becoming a recording artist and songwriter of note. In just a few years time Alayna would be writing with hit songwriters such as Steve Dean (“Watching You” for Rodney Atkins), Jeffrey East and Kirsti Manna (“Austin” for Blake Shelton) playing well-known venues like Bluebird Cafe and Nissan Stadium. In 2012, Alayna received an endorsement from her favorite guitar company, Breedlove. Alayna’s fan-funded EP "The Wrong Side" was released in May 2015 and charted at #30 on the iTunes UK Country charts.

To date, Alayna has over 1 million YouTube views & 20 independent cuts. ​ A few of her career highlights: