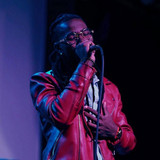 Jaleal is a R&B/Soul singer, songwriter, musician, and vocal producer from Chicago, IL. Like many, Jaleal got his start singing in church; then later found himself exploring the music scene in Chicago. He’s been featured on various house records as ‘Jaleal Meadows’, and has performed background for many recording artists in the area such as Dwele, Bilal, Malone, Sheree Hicks, and Ken the Messenger. In addition to music, Jaleal pursued acting and landed small roles on NBC’s Chicago PD and FOX’s Empire. Considering that Jaleal’s musical influences are Tank, Robert Glasper, Musiq Soulchild, and Chris Brown, he has a unique way of expressing emotion through each note and lyric to captivate his listeners. R&B is making a comeback, and the timing couldn’t be more perfect for Jaleal to reintroduce himself to the world. His debut R&B single entitled “Back 2 the Basics” is now available on all streaming platforms. Contact: patrice@thebasslinegroup.com