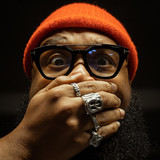 Blurring the lines between Country and hip-hop music, Blanco Brown makes a southern sound that he proudly calls "trailertrap." It's a boundary-breaking, multicolored genre of his very own — which draws upon the rawness and storytelling abilities of his two biggest musical influences, Johnny Cash and Outkast. His debut EP, Blanco Brown, showcases the full range of its creator, who juggles multiple roles as the project's songwriter, producer, vocalist, visionary, and multi-instrumentalist. Years before he rose up the ranks as a Grammy-nominated engineer and major-label solo artist, and one of Billboard’s “7 Country Acts to Watch in 2019” Blanco— grew up in two very different worlds, both in the state of Georgia, splitting his time between the city projects and the rural countryside. During the school year, he'd spend his months in Atlanta, where the crime that filled his neighborhood was offset by the love and musical connection shared by his family. Every summer, he’d head out of town temporarily moving in with relatives in the small rural town of Butler, GA. "This album accentuates one side of what I went through, I can’t forget the hood," says Blanco, who writes compellingly about his youth on songs like “Ghett Ol Memories.” "I didn't start out trying to make Country music, but these are the sounds I love—and always keep coming back to time and time again... That's what this music stands for: unity. It's multiple influences and sounds and styles, all coming together."