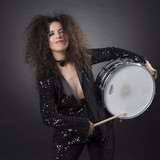 Drummer, singer and composer with a prominent career both as a solo artist and alongside the most important names in Argentina’s and in the international popular music scene (Soda Stereo, Divididos, Charly Garcìa, Attaque 77, Los Rodríguez, Tito Puente, Celia Cruz, among many others). As a solo artist, she has released 4 records: Andrea Alvarez (2001), Dormís? (2006), Doble A (2008, produced by Jim Diamond) and Y lo dejamos venir (2015 and nominated for "Best rock album" for the Latin Grammys 2016). Her work was recognise with an award as the "Best feminine rock artist of the decade" from the Konex Foundation, which is one of the most prestigious in Argentina. She was the first artist to create a quality audiovisual record of her work at the studio (Doble A en vivo en Estudio ION) that was distributed online with free access. She also runs her own website, where she blogs constantly, and complements her work as a drum teacher. Andrea also promotes drumming and the diffusion of emergent music as the argentinian ambassador for the "Hit Like a Girl" (international contest for female drummers) and as a jury in the argentinian contest TV show "Rock del país". Currently she's part of the permanent band of the famous actress and singer Natalia Oreiro and she´s working in her EP, in which she presents 4 new songs and their videos. During the beginning of

2017 she performed as the drummer of the renowned artist Draco Rosa.