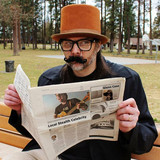 So, I guess I am writing this about myself. Cool. I would describe myself as being merely an adequate musician, but my philosophy largely skews towards doing the best that I can with what I have. The hope is that I have drawn from enough influences to not sound too much like any one of them, but I imagine there are some heavy hitters that are more obvious than others - The Beatles, Paul Westerberg, Foo Fighters, Gerry Rafferty, XTC, Todd Rundgren, and Elvis Costello among them. I have released tens of albums thus far, and I am working towards hundreds. Some highlights include the soundtrack for "The New Adventures of Captain S" and "Throw Money", the latter had a successful Kickstarter campaign to commit the album to vinyl! I create music with a number of groups including Buffalo Jones, Great Mimes, and the Grammar Club. I have also been fortunate to have some of my musical heroes appear as guest stars on my songs - including Craig Northey, and Ellis Paul! In short: I imagine I am going to continue to make music as long as I maintain the ability to do so. I love music. I love creating it, and I love listening to it. As a listener, you now have an overwhelming variety of choices, so I greatly appreciate you taking the time to read this and to listen to my output. Thank you!<br>