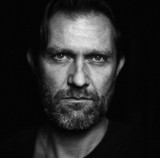 Mike Andersen has a uniquely characteristic and powerful voice, an intense guitar style and a fantastic band. These are just a few of the many reasons he is one of the prime concert attractions in Denmark and Northern Europe.   The inspiration of years of touring has given Mike’s new recording the maturity and soul of hard-earned real-life experience. You can hear it and you can feel it or as Mike says it: “I’m 43 now and old enough to smile at how amusing my younger self’s know-it-all attitude was back in the day. I’m also old enough to understand the vital importance of keeping an open mind and moving forward, not backwards.”   This open-minded and sympathetic attitude shines through on Mike’s new single, SLAMMING THE DOOR, an amusing and entertaining look at the choice between becoming a grumpy fossil personally as well as musically and slamming the door on enlightenment or embracing the wonders of a changing world.   The new single is from Mike Andersen’s 9th full length album to be released in 2021. During the last 20 years, Mike and his band have established their own distinctive sound, built on the riches of the Afro-American music Mike heard and loved as he was growing up: Blues, R&B and Soul.   www.mikeandersen.com