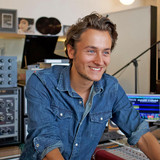 Jan Willem de With is an award-winning German-Dutch film composer, producer and musician currently based in London. His soundtracks and film productions have been internationally screened and performed at film festivals and events in Cannes, London, New York, Prague, Cologne and Zurich. For some of his productions, he has collaborated with musicians and ensembles such as "The City Of Prague Philharmonic Orchestra”, “Budapest Scoring Symphonic Orchestra”, “State Orchestra Halle", and Eurovision singer-songwriter Chiara Dubey. These collaborations have led to work in locations such as Abbey Road Studios London, Air-Edel Studio London and Smecky Studios Prague.