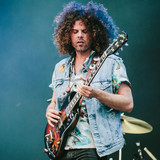 Pledging allegiance to thick, throttling fuzz guitars, primal psychedelia, and thundering rhythms, the 21st-century rock revivalists Wolfmother split the difference between the classic sludge of Black Sabbath and the retro-garage rock of the White Stripes. Formed by lead guitarist/vocalist Andrew Stockdale in 2000 Wolfmother spent a few years woodshedding before the power trio came storming out of Sydney, Australia in 2006 with a self-titled debut that generated international hits in the form of "Woman"; and "Joker And The Thief";. Wolfmother, the album, turned into a big hit; eventually being certified quintuple platinum in Australia. Other territories soon followed with the album performing well in each of them thanks to the singles "White Unicorn" "Woman," and "Joker & the Thief," along with a host of film, television, and video game placements, not to mention constant touring with a focus on festivals. A new track "Victorious" was issued as a pre-release single in November, and followed by a second "Gypsy Caravan" in January 2016. In February, the album Victorious was released. Recorded in Hollywood, it was produced by Brendan O'Brien. the lineup listed Stockdale on guitars, basses, and vocals, Peres on keyboards, and drummers Josh Freese and Joey Waronker.