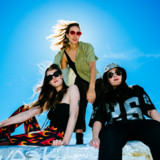 On their debut album 5 Years Behind, THICK confront the countless disappointments and injustices they deal with every day: the reckless hypocrisy of people in power, social media’s erosion of genuine connection, dudes who feel inexplicably entitled to share their most loathsome opinions. But even in their most exasperated moments, the Brooklyn-based punk trio sustains a ferocious energy and untamed joy, ultimately turning every song into a wildly cathartic anthem. The follow-up to their 2019 self-titled effort—THICK’s third EP and first release for Epitaph Records—5 Years Behind came to life at Studio G Brooklyn with producer/engineer Joel Hamilton (Iggy Pop, Jolie Holland). In a departure from their previous work, the band took a more spontaneous approach to the album-making process, sometimes completely reworking songs at the eleventh hour in order to channel the most immediate emotion into each track. “It was really important to us that the songs feel emotionally connected to our reality, so that it feel as natural as possible to play them,” notes Black. Nikki Sisti (guitar, vocals) - Kate Black (bass, vocals, guitar) - Shari Page (drums, vocals)