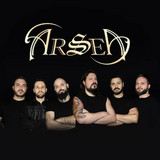 Active since 2007, the band has played some of the most important stages in Europe (such as the mainstage of the METALCAMP and METALDAYS in Slovenia, MORE THAN FEST in Slovakia, mainstage at the HILLS OF ROCK in Bulgaria, MAXIMUM ROCK FESTIVAL in Romania etc.) sharing the stage with bands like Kamelot, Guano Apes, Evergrey, Evanescence, Pain, In Flames, etc. The latest album, A NEW DAWN (first official album, succeeded by two demos), is released by REVALVE RECORDS and distribuited in USA, EUROPE, JAPAN. In 2020 the band started the recording sessions of the new album; the pandemic situation that has affected the whole world has slowed down the recording sessions due to lockdowns and the inability to travel to go to the studio. Meanwhile, the band recorded two singles: Changes, which achieved good feedback in 2020 and UNFAIR which will be released on September 10, 2021. Concerts scheduled and currently confirmed for 2022: - Vagos Metal Fest, Portugal Contacts: booking@arseaworld.com provenance: Viterbo, Rome, Turin, Madrid