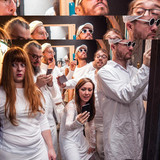 PRESS FOLLOW /// Redefining notions of failure and success. Electronic Art Rock..? a.P.A.t.T. are an English art collective best known for their avant-garde music and multimedia works. Since their first official release, (e.P.) (2002), the group has released over 9 full-length releases, numerous singles, music videos and short films, multiple commissions from leading arts organisations, a feature film and even cameoed in a BBC Sitcom. a.P.A.t.T. began with the completion of a C90 cassette in around 1998/99, the way that music was collected seemed to influence the ‘genre-less’ approach and inform the somewhat anti-hierarchical line-up of the act. Fun with Music (2016) sees the band more refined and focussed than ever...” Their most accessible work yet..in a freaky kinda way.” says BBC's Stuart Maconie.

Consider it their White Album.