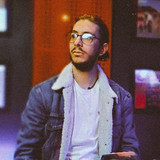 Simone Bertolini aka Simber is a 26 y/o producer based in Palermo, Italy. Although he never liked being defined by a single musical genre, it's easy to spot prominent lo-fi, chill-hop, funk and R'n'B influences in his beats. Simone discovered his passion for music at a very young age, when he started taking singing lessons. Then, during his early teenage years, he became very fond of retro music. He’s been producing for more than 8 years, starting with EDM and Hip Hop beats, until he found his unique and distinctive sound. Simone also works for Stereofox as a content creator and Brunch Collect A&R, which helps him have a more complete view of the music industry. After several releases, in 2020 Simber released Eternal Sunshine w/ Tibeauthetraveler, a chillhop track signed by the label Chill beat which has reached more than 1,000,000 plays. His inspiration is completely intuitive: while producing music Simone is actually expressing his feelings and inner sensations. The artists that helped Simber shape his style are FKJ and Anomalie. Contact : iamsimber@gmail.com