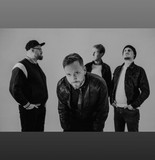 HERMETRIK are widening the gap between Indie, Post-Punk and Electro. Their sound is a musical meet-up between the German (hip-hop / electro band) Deichkind and Depeche Mode. You think that doesn’t match? But it does!!!. The light-footed but at the same time thrilling and infectious clash between 80s electro and 2019s indie disco works perfectly. The beats are pushing, a thunder-like bass is rolling whereas the voice ranges from the expression of world-weariness to an ueber-world-embracing and joyfully energetic, anthemic style. Party par excellence! In October 2019 HERMETRIK released their first album SILVER and launched an album tour with gigs all over Germany and the Netherlands which is gonna be continued in 2020.