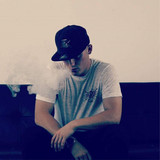 TINY K's music acts as that bridge to reach his listeners who are in their darkest days, with the intention to pull them out of the shadows and into the light. It’s hard-hitting, lyrically raw and fuelled by an intensity that comes from knowing the struggle and having the desire to move forward. Born in July 1995 in Ashford, Kent (UK), it was the discovery of Grime at 11 years of age that inevitably shaped TINY K's career. From opening for Snoop Dogg at the London O2 Arena at the age of 19, Tiny K has gone on to perform at a host of world-renowned venues and festivals such as Reading Festival, Southbeats Festival, Blove Festival, Roundhouse London and The Gallery. Additionally, he has received countless press mentions across notable publications including Reuters, Apple, Spotify, BBC, The Guardian and more. Despite a less than favourable upbringing, it was pen and paper that acted as the form of escapism that allowed TINY K's expression of his inner feelings to be projected outwards into reality. TINY K is sitting on a slew of hard-hitting singles, including Roll Out (feat. Nikolai), Take Me Back, and Fade Away (feat. Matt Wills), which was accompanied by a music video that featured on Link Up TV. Now planted in the UK Rap and Hip-Hop circuits, his new direction sets the sonic foundations for his forthcoming debut album. Titled 'Sub Urban Delinquent', the full-length LP is a collation of TINY K’s finest cuts.