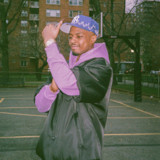 Pi'erre Bourne emerged as one of the pre-eminent rap producers of the late 2010s, scoring major hits with Playboi Carti and 6ix9ine, in addition to working with Kanye West, Travis Scott, 21 Savage, and others. Also active as a rapper, he has recorded several solo mixtapes (The Life of Pi'erre series) and singles, showcasing his atmospheric beats and Auto-Tuned crooning. He first gained widespread attention when he produced Carti's 2017 breakout hit "Magnolia." He later received acclaim for Sli'merre, his 2019 mixtape with frequent collaborator Young Nudy. Born Jordan Timothy Jenks, Bourne spent his summers with his grandmother in Queens, New York, where he became interested in East Coast rap. Inspired by his uncle, who was a rapper and graphic designer, he began making beats while in elementary school, and later moved to Atlanta to study sound engineering and pursue a career in music. He began releasing music in 2014, and worked at Epic Records as a sound engineer beginning in 2015, leaving a year later to focus on his career. He released three volumes of his solo mixtape series, The Life of Pi'erre, in 2016, and produced tracks for Young Nudy and Trippie Redd the same year. After meeting Playboi Carti, Bourne produced several tracks on the rapper's self-titled debut, including "wokeuplikethis*" (with Lil Uzi Vert) and "Magnolia." The latter was a breakthrough for both the rapper and the producer, with Bourne's producer tag ("Yo Pierre, you wanna come out here?," sampled from The Jamie Foxx Show) spinning off into an Internet meme in its own right. Bourne and Carti also recorded a song called "Yo Pi'erre!," which was announced as being the first single from The Life of Pi'erre 4. From there, Bourne became one of rap's most in-demand producers. By the end of 2017, he had produced songs for Lil Yachty, XXXTentacion, 21 Savage, 6ix9ine ("Gummo"), Big Sean, and many others. Bourne produced the majority of Carti's acclaimed 2018 full-length Die Lit, in addition to producing Travis Scott's "Watch" and co-producing Kanye West's "Yikes." In 2019, Bourne and Young Nudy released their first full-length collaboration, Sli'merre, to critical acclaim. That summer, he issued his official full-length debut, The Life of Pi'erre 4. The hazy, Auto-Tuned set featured the track "Poof" and landed just outside the Top 100 on the Billboard 200. ~ Paul Simpson, Rovi