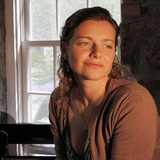 THE DAILY QUARANTINE PIANO MEDITATIONS, with Heidi Breyer beginning on FB/Youtube LiveStream tomorrow - 5/4/20. Times for upcoming week here: Monday 4th -10am Tues 5th -2pm Wed 6th -1pm Thur 7th -2pm Fri 8th -10am Sat 9th -3pm Sun 10th -7pm PRIOR PRESS: In January 2018, Heidi released her fifth album, Moonlight In Empty Rooms. It is a double cd-dvd of stunning piano and violin pieces, a study and tribute to her husband’s artwork, world renowned oil painter, Alexander Volkov. Critics pronounce Moonlight as Breyer's best work to date and was be entered into 3 categories in the second round of 61st Grammy Awards, won ZMR Piano Instrumental Award, 2019 and second place in IMA 2019. “A musician and composer who refuses to remain static in her musical evolution, Heidi Breyer has given us her finest and most accomplished work in Moonlight In Empty Rooms.” Will Ackerman.  Bill Binkelman Review – “Breyer’s control of nuance and shading is a marvel throughout the disc, no matter what tempo, volume, or mood she is playing...just as striking is the sense of intimacy, the immediateness of her performance...the best work Heidi Breyer has yet recorded and special seems wholly inadequate in describing this work from a truly gifted artist.” ZMR awards include Best Instrumental Piano 2012,