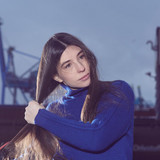 Linnea Dale first caught the public eye only 16 years old after reaching the finale of Norwegian Idol in 2007. Her unique voice was quickly noticed and she was soon asked to participate as guest singer with the band Donkeyboy. The collaboration was hugely successful and resulted in smash hits like "Ambitions" and "Sometimes". Both singles topped the Norwegian charts in 2009. The same year they became two of the most played songs on Norwegian radio, and "Ambitions" was nominated for two Norwegian Grammy awards. "Ambitions" soon reached no. 1 in Sweden, and also made the charts in several other European countries. The Donkeyboy success led to extensive touring all over Europe and numerous TV and radio appearances.   In 2010 Dale chose to focus on her own career. Her first solo album "Lemoyne Street" was released in 2012 on Warner Music. The album was produced by Øystein Greni from Bigbang. The follow-up album "Good Goodbyes", produced by Kim Bergseth and Paal Waaktaar from a-ha, was released in 2014. The same year Dale participated in the Norwegian finale of the Eurovision Song Contest with the single "High Hopes".   Her third solo album «Wait for the Morning» was released on Aftertouch Records in 2018, and received raving reviews in Norwegian press.   Dale was also a contestant on the Norwegian tv-program Hver Gang Vi Møtes in early 2020.   Her latest single “Out Of Heaven” is available on Spotify now!