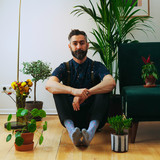 Ran Nir is an Israeli producer and musician living and creating from Berlin. Ran's music is perfect for when you are sad but still want to be optimistic about life. Ran's deep voice was compared to the likes of Leonard Cohen and Nick Cave and the music is a modern mixture of Folk, Rock and Pop reminiscent of Devendra Banhart or Beck. Before releasing music under his own name Ran was as a founding member of the band Asaf Avidan & The Mojos

and the songwriter and frontman of LFNT. In 2019 Ran released his debut solo album Obsession under his own label (IMU Records). Ran is working on a new album to be released in 2021. *Photos by Robert Paul Kothe