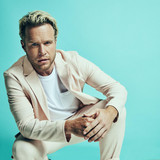 Olly Murs celebrates a decade at the top of the music business. The last time we heard from Olly Murs, one of the defining pop voices of the last decade? Well, in some ways, it wasn’t that long ago. There he was, front and centre on the recent series of The Voice. A big personality in one of the big chairs, alongside will.i.am, Tom Jones and Jennifer Hudson as a coach on the hit show. For sure, he’s done a lot of TV presenting and hosting, pursuing a winning, naturally born, twin-track career in music and telly. But this was something else. But the last time we&nbsp;really&nbsp;heard from the real Olly Murs? He’s not afraid to admit it: that was a while ago. For sure, his fifth album 24 Hours came out two years ago, giving him his fourth Number One album. And certainly, he toured it as enthusiastically as he’s done pretty much every year since bursting onto the scene with his double-platinum self-titled debut in 2010. But that last set of songs represented a different Olly: a man reeling from a romantic split, and pouring those feelings into heartfelt songs like You Don’t Know Love, Grow Up and Years And Years. His brand new single Moves is a surefire cert to join the pantheon of Olly’s best loved songs. Olly gives one of his great vocal performances, alongside a genius rap from guest vocalist Snoop Dogg. And the songwriters? Ed Sheeran and his frequent writing partner, diamond-plated hitmaker Steve Mac (Shape Of You, Pink’s What About Us, tonnes more).