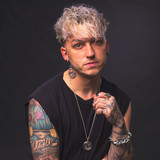 ǝuo SS˥⊥ᴚH ǝɥʇ   Since launching with his Mix Tape ‘Vol.1’ in Oct 2020, HRTLSS has effortlessly displayed his ability to push the boundaries of genre blending with his dark and moody Alt-Pop sound driven by Emo/Punk vibes.   Dropping out of high school, he built himself an impressive reputation in the screamo/metal scene. He formed a band that toured heavily around Europe, debuting their music on MTV2, receiving support from Kerrang Magazine and even being noted as the ‘new young whipper snappers of Metal’ by Bruce Dickinson of Iron Maiden. The young artist smashed out 6 years of heavy touring until parting ways with the band aged 19, to explore other avenues.  After a break and back with his new project - HRTLSS has come, seen, and is determined to conquer. Working relentlessly on new material to build his fan base and start making a mark in the music industry.   Off to a solid start, in just 12 months, HRTLSS has released collaborations with artists such as LAYNE, pre kai ro, Huntar, and Dave of Mallory Knox.   This isn’t an artist to be slept on.  Everything is written/performed/produced by HRTLSS, and co-written/produced by his counter-part producer TTen.