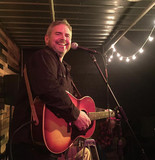 John Louis crafts smart, poetic, heartworn country folk songs. Born of a blend of observation, experience, introspection and empathy, John’s songs have garnered attention and awards from prestigious songwriting showcases including the Kerrville New Folk competition, Rocky Mountain Folks Festival Songwriter Showcase, and the Great River Folk Fest songwriter contest. “John Louis is a good man writing great music up in Minneapolis.” Jon Dee Graham Born in Minneapolis, John Louis grew up on a farm outside the city where he nurtured his introverted side meandering through the woods, wetlands and pastures, alone with his thoughts and observations and perhaps a dog or two. At home he was exposed to healthy doses of songwriting giants from the 60s and 70s on his parents’ turntable. Eventually that solid base led him to the usual list of folk and country icons who shaped his songwriting sensibility. For years now a committed city dweller, John retains a watchful eye and ear attuned to a good story, a poetic line, and an occasional nugget of truth. “I love the songs that John Louis writes. LOVE!” Sarah Morris John Louis is continually writing songs and making music. He is looking forward to releasing a full-length record in the near future. And touring again after doing so is a reasonable thing to do post-COVID19. But you can listen now. “John Louis's songwriting is reminiscent of Kris Kristofferson, John Prine and Townes Van Zandt.” Radio Heartland, Minnesota Public Radio