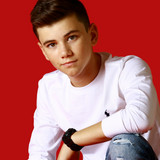 Alexander James Rodriguez, who on January 27, 2021 received the 'Rising Star (Male) Award' at the Hollywood Music in Media Awards recorded his debut single 'My Crew', along with 'Your Smile' and 'Up To You' in Los Angeles, during the first California state-wide lockdown for COVID-19. His cover record 'Holiday in LA' released on November 6, 2020 for UNICEF, an organization that provides humanitarian and developmental aid to children worldwide. At the top of 2021, the 13-year-old released his first coming of age ballad, Doesn't Matter To Me and soon after his uplifting single, We Are, and more recently released his State of California anthem, California. The young artist has more surprises in-store for listeners as he begins a new journey of fresh sounds, including a LATAM single, Bella Loquita, and latest drop, Cherry Bomb, which was nominated for a Music Video (Independent) award November 2021. As an actor, Alexander has appeared in several major feature-length films and various national TV commercials, print campaigns, TV shows, and stage productions. He is best known for his British voice-over work on the Netflix show 'Bee and Puppycat' and upcoming movie 'Replica'.