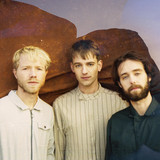 Danish EIRENE is modern and 'future proof' pop music with a twist of neosoul, created from a broad inspiration ranging from mainstream pop to r'n'b, hiphop and soul. The sound is characterized by massive energy bursts, strong hookes and catchy toplines supplied by high and insisting vocals. The somewhat raw and personal lyrics reflect everything that goes through the mind of a young man in his mid-twenties. Authenticity is key in the way EIRENE create their music. The dream is to play along on the large scaled, mainstream platforms but at the same time it is the fear of sounding like “everybody else” that drives the three guys and their creativity the most. A lot of identity tied to the songs - because as lead singer Kristian Kolby says: "I wouldn't know who to be without this project".   Besides from Kristian, EIRENE consists of Sebastian Vistisen Toft on keys and samplers and Klaus Ager Sørensen on drums. All are born and raised in the western part of Jutland, Denmark, but now based in Copenhagen and Aarhus. Their shared ambition mixed with countless sessions in the studio have resulted in a strong and rooted friendship.   "Clearly it has a great effect that we are a band and not just a solo artist with two live musicians. Sharing something like this creates a whole new dimension, both according to songwriting and especially the energy on stage".