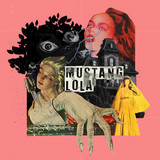 Mustang Lola (Liesbeth Hans) is born and raised in a little town in the east of the Netherlands. As a kid she used to listen to her fathers records of country and folk singers. But as a teenager rock music was for more interesting, so her parents would hear the loud guitars of Smashing pumpkins, Audioslave and Nirvana through her bedroomwalls. These two musical influences formed Mustang Lola as a songwriter. Resulting in interesting songs where country meets (sleazy) rock. Or as Mustang Lola likes to call it: ‘Sleazy Country’. With a few detours Mustang Lola ended up in Amsterdam. A city she immediately fell in love with and considers as her biggest inspiration. Most songs she wrote since then are about the people, adventures and – off course – the love she encountered in Amsterdam. That’s also when she started her americana band ‘Mustang Medicine’ with her close friend Anne Kruiter on guitar, Marja Silvertant (bass) and Sicko Octovianus (drums). Her first single released as a solo artist is ‘little phantom cowboy’. A song written about a boy who escapes his violent father once a year, when he gets to haunt him like a phantom.