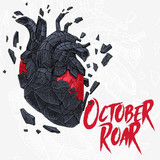 "We love to play, no gig is too small, if you're there, you're family". October Roar consists of Adrian Varela (Vocals), Sean Casarez (Guitar), Matt Ruelas (Guitar), Rey Cabrera (Bass) and Ivan Gomez (Drums). In development since 2005 October was not complete until 2011.

They frequent the metal/rock/punk scene in deep South Texas but are no strangers to bigger market cities like San Antonio and Austin. Touring is the ultimate goal at the moment. In late 2018 October Roar also signed an endorsement deal with Dirt Bag Clothing.