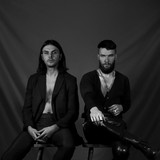 Formed in Manchester over a decade ago, Hurts are an electronic pop band featuring vocalist Theo Hutchcraft and multi-instrumentalist and producer Adam Anderson. Known for their striking and stylish videos and epic, dramatic, pop music. In 2010, Hurts' debut album, Happiness, was released and quickly became a huge success across Europe reaching Platinum status 13 times over and 4 times Gold around the world. Subsequent albums, Exile, Surrender and Desire have since followed suit along with achieving numerous accolades including NME Awards, a German BAMBI award, MTV Europe Music Awards and Best International Newcomer at Germany's ECHO Awards. Having sold hundreds of thousands of live concert tickets around the world over the past decade, and often a fixture of the global festival circuit headlining stages around the world, the band have built an enviable touring fanbase. 2020 saw the band return with their fifth studio album FAITH, featuring epic new singles ‘Voices’ 'Redemption' and 'All I Have To Give' supported by an incredible creative campaign the band reached out to fans via technology like never before, involving them every step of the way. It has also seen the announce of their biggest ever tour in 2021 stretching across 3 months with 18 dates in Russia alone, the tour will see them play in several territories for the very first time.