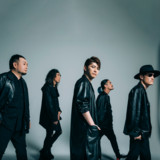 Vocal: KOHSHI Vocal: KEIGO Guitar: TAKE Bass: GOT’S Drum: IWASAKI FLOW is a 5-person rock band made of up KOHSHI (Vocals), KEIGO (Vocals), TAKE (Guitar), GOT’S (Bass), and IWASAKI (Drums). Siblings KOHSHI (Vocals) and TAKE (Guitar) have been making music together since 1993. They formed FLOW in 1998. KEIGO (Vocals) joined in 1999 with GOT’S (Bass) and IWASAKI (Drums) joining in 2000 to form the current group. FLOW has released 33 pieces of single and 10 pieces of original albums since they made a major debut with a single of “Blaster” in 2003. During their performance in the last 15 years, they have been tied up with more than 50 animation and supported by wide range of people. In the last year, especially, they had made a live tour focusing on theme songs of Animation of “NARUTO” ,“Code Geass: Lelouch of the Rebellion”, “Tales of Zestiria the X.”,” Dragon Ball Z”and etc. The live tour was named as 15th Anniversary TOUR 2018[Anime Shibari] and went beyond the genre of Anime Lock. As FLOW work proactively in abroad, they ,as “Live Band” has delivered their music to the fan of Japanese Anime in the world with the live tour in more than 18 countries such as Asia, North America, South America and Europe. On January 31, 2019, they played their second live performance at Nippon Budokan after 10 years of success, and on April 10, 2019, a new original album [TRIBALYTHM] was released. In the sixteenth year of their performance, keep your eyes on FLOW, the most rising artist.