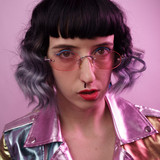 ‘That chick serving up fresh beats from a neon food stand.’ Jessiquoi’s live set looks and sounds like it belongs in futuristic Shanghai ca. 2048. Combining raw, physical energy and dance-driven beats colliding with audacious rap and resonant vocals, she won Demo of Year and Best Electronic at M4Music Festival, Zürich 2018. This award was followed by well received performances at international showcases in New York and mainland Europe. In 2021 she returns with a new collection of songs, which she began working on while in pre-pandemic China. Each song is meticulously pieced together with detail and unexpected direction, which, alongside her electrifying live shows will leave you with the same buzz you might feel from ‘visiting the robot restaurant in Tokyo after drinking 5 Red Bulls.’ (RCKSTR Magazine) With a holistic approach to both audio and visual world building, she explores and blurs the boundaries between inner worlds and reality, creating electronic soundscapes which reflect on our current time from 30 years in the future.