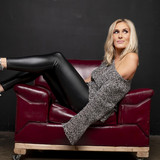 Singer-Songwriter Monique McCall began her recording career while performing a six- month exclusive run for Costa Cruise Lines, in Italy to selling out nightly. This smashing success led to Grammy-award winning producers Rudy Perez and Joel Numa bringing to life her multilingual effort, “Dove il Mio Amore” to European Audiences. In 2017, Monique embarked out in her heart’s direction and joined forces with Grammy Award writer Skidd Mills, and Grammy Nominated Producer Bryan Todd on a new Country full-length project, showing her down home roots. Upon arrival back to the U.S, “Monique penned the first single from this effort, “Feel like Florida”, an ode to her home state and perfect kick off to Summer. Her expansive range, stunning stage presence, and dynamic showmanship, are a few of the reasons audiences are left wanting more. A former Ms. Connecticut, She was signed by Bacardi as one of their featured recording artists, in recognition of her ability to cross all cultures through her music. Monique also likes to lend her talent and time to charity and in 2018, Monique was nominated for the Leukemia and Lymphoma Society’s “Woman of the Year” for her efforts, as well as being a featured performer at the Annual Gala for the Susan B. Komen Organization.