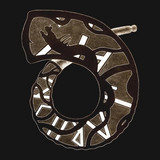 GJALLARHORN was founded in 2004 in Kherson city, Ukraine. Since then and till today Pagan Black Metal is the music style of the band. "Ancient Times" demo was recorded in 2005. "Land Of Forgotten" EP and "Awakening" full-length were released in 2007 and 2008 consequently. After that the activity of the band was decreased for a while because of the change of the line-up. "Legacy" album was released in 2013 – this is conceptual project featuring bandurist Yevhen Vetruk, dedicated to the Age of Cossacks. Split EP with HETMAN "Ivan Pidkova" and the second full-length album "From Heart Of Mine I Fill The Chalice" was released in 2014. "The Path To Eternity" EP was released as part of RAVNKALD / GJALLARHORN / FJORD split in 2015. The most of lyrics of GJALLARHORN is written in Ukrainian and dedicated to the Heathen Weltanschauung, battle themes and local historical events. The band uses local artists' exclusive material for the design of the albums. Together this all composes the concept of the art of GJALLARHORN. https://gjallarhorn.org.ua/