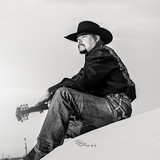 Mike Hernandez started his musical career at an early age. His first taste of the spot light was at the age of 9, his mother Sandy Hernandez stopping a mariachi group ridding on a float in the Cinco De Mayo parade in Andrews, TX telling the group, “This is my mijo (my son) and he sings!”. Hernandez recalls getting to perform with the band for the entire parade! Hernandez initially started singing mariachi music and later developed his love for country music. Mike states; “I started singing music like Pedro and Vincente Fernandez”. Music has always been a positive outlet for Hernandez, along with 23 years of bull riding! He joined The American Junior Rodeo Association in grade school and climbed the ranks to the professional level. Perhaps it's this dangerous sport that taught him to be persistent even in his music career. Hernandez pointed out, bull riding taught him how to work hard to be the best! After attending community college Hernandez enlisted in the United States Marine Corps. He served our country from 1998 until 2000, stationed in North Carolina; in 2002, Mike Hernandez went to the police academy in Odessa Tx, and graduated top in his class, Mike proudly stated, “I was proud to serve my country and was honored with awards and medals over there.”