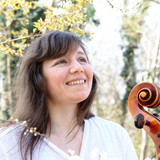 Natasha moved to Berlin in 2012 after finishing a Master's Degree at Temple University with cello legend Jeffrey Solow. She also previously studied with Dr. Mathias Wexler, and before that her parents, renowned cellists Claudio Jaffé and Johanne Perron. Her first band was Steve Goldberg and the Arch Enemies in Philadelphia. They introduced her to using effects with an electric cello and playing with drums and bass. She moved to Berlin in 2014 and met Enda Gallery

(now delush ), a recent arrival in Berlin from Ireland, who was looking for someone to go busking with. What followed was a summer full of busking in Mauerpark and elsewhere in Berlin, and playing tiny gigs in tiny bars for tiny audiences.