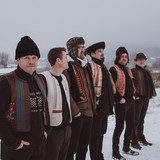 The career of Muzička started with a performance at friend’s wedding. This original success encouraged them in the continuation of their musical training. This also meant the beginning of a search for old authentic recordings, - which were in opposition to what had become “institutionalized folklore” – this original and authentic music captured Muzička’s members and until this day has become their deepest inspiration. The enchantment of this music was so intensive that it led the band to concentrate on the interpretation of Slovak folk singing and music in the most authentic possible way. In following performances these musicians fully showed their excitement, temperament and energy that have become the characteristic features of Muzička’s way of making music. The first CD (Muzička) from the year 2001 received a good response from fans and was a source of encouragement and energy for the work which followed. Thanks to this, in 2002, the band accepted an invitation to Lublin in Poland to perform an individual concert. From this concert Muzička recorded a CD called „Muzička live in Lublin“. Muzicka regularly participate in the Dance Houses – an event bringing folklore and folk dance to a wider audience. The project with name Huslovacka was presented at all major folk festivals all over Slovakia. It was a begiining of new movement of Slovak folk presentation. The biggest appreciation of Muzička is, that is regularly invited for folk dance parties all over Slovakia.