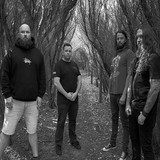 Hailing from Newcastle, Australia . Chaosaint blur the lines between groove metal and melodic hard rock. The band’s roots date back to 2001 as the members of a former group known as “Exhale.” However, the combo took somewhat of a lengthy break before eventually coming back to life with a newfound identity and a completely revised musical direction. The first single- Darkness Following, was released in May 2020 and has received overwhelmingly positive feedback from both fans and peers alike, and has featured on a variety of playlists across various platforms. June 2020 will see the release of the 5 track EP- ‘In The Name Of’ to their growing fanbase. The entirely self produced effort was recorded over various periods dating back to 2016 and showcases a wide cross section of what the band are capable of. For the remainder of 2020- the band plan to play live shows in support of the release (when possible) and continue the songwriting and recording process for a full length release in the near future. Chaos is coming