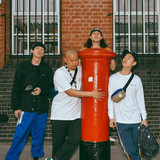 DTSQ is a strong cocktail with heavy shots of various genres such as blues, garage rock, electronic, psychedelic, jazz and pop. Formed in 2014 in Seoul, South Korea, They started their career as a synth-punk band but their diversity of music tastes kept pushing them to change their musical direction. On the last day of 2017, They dropped their first full-length album ‘Neon-Coloured Milky Way’. In comparison with their first EP ‘Dig Out From a Box In The Basement’, The album sound has changed a lot. That’s because after releasing the EP, They started to listen to psych-rock, Its bizarre sound and unpredictable song-structure gave them completely new and fresh ideas which they had never had before. Now they return with flying form on their sophomore album ‘Moon Juice and Space Biscuits’. Nine tracks (plus a bonus demo recording) complete a multi-layered psych rock lp, brimful of adrenaline-filled highs and trademark technicoloured space jams. Inspired by the melodic structures and expressionism of music from the 70’s, lead talisman and songwriting sonic sourcerer, Suhyun Kim’s vision for the album was to create what he’s termed “Easy-listening psych pop.” This is a brighter, tighter and more vibrant surround sound than they have produced before and the result is highly accessible, tripped out pop which is at its core: joyful.