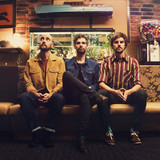 DANSU is an indie-pop act from Amsterdam, whose neo-pop grooves are undeniably catchy yet refreshingly unpretentious. Having already racked up millions of streams, while being featured on Spotify’s Global Viral top 50, this band is on the move… fast! After scoring a Shazam top-10 hit in Israel and a release on French label Kitsuné, the boys of Dansu are working hard on their mission: spreading some much needed love across the Universe! So, what are you waiting for? Dance like no one is watching!