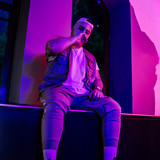 Diamond and Multi-Platinum certified Lithuanian DJ and Producer DYNORO began his phenomenal career in the music industry back in 2018, releasing his biggest hit "In My Mind" - a mashup of the Tomorrowland song of the same name by Ivan Gough, Feenixpawl and Georgi Kay and Gigi D'Agostino's single "L'amour Toujours". The single reached #1 on Spotify, Apple Music and Shazam in 13 countries and was on top of the charts for weeks. The song was on heavy rotation on the US dance radio, entered the official US single charts at number 5 and sold more than 3.7 million copies worldwide and over 1 billion Spotify streams, a diamond status in Germany and France as well as platinum and double platinum in Austria, Switzerland, Italy, Belgium and many other countries. After the tremendous start with “In My Mind”, DYNORO secured the follow-up coup with “Obsessed”, the dance-pop collab with Norwegian artist Ina Wroldsen, Brazilian producer Alok with “On & On” and EDM ‘heavyweight’ Ilkay Sencan with their single “Rockstar”. After a break, DYNORO returns with a bang, presenting his new single “Monsters” together with the famous American rapper, songwriter and singer 24kGoldn.