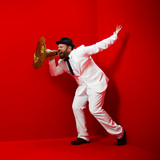 „A voice that’ll strip the paint off cars”. Daniel Welbat sings like he’s been hanging out in the darkest of dive bars for years.   This “Rock-Noir”-Sound is falling in love with hip hop. Jazzy scintillations kept in check by the Blues. Glorious melodies and catchy hooks pull you in and won’t let go. And through it all, this marvelous band with their gripping groove manages to present the sophisticated arrangements in an accessible way. WellBad created a stir in Hamburg when they came out with their debut album “Beautiful Disaster” in 2011, followed by “Judgement Days“ (2015) and “The Rotten” (2017). In 2015, WellBad won the Best Band Award at the German Blues Challenge. The German Record Critics' Award (“Preis der deutschen Schallplattenkritik”) designated “The Rotten” as its Quarterly Critics' Choice in 2017. WellBad appears on German prime-time television (ZDF, ARD, RTL, NDR) and tours as opening act for Robert Cray, Oli Brown and Tito & Tarantula. In 2018 they wowed the audience at Hamburg’s famous Elbphilharmonie concert hall. WellBad performs at international festivals, including Memphis, Tennessee (USA), Torrita di Siena, Italy, and at the Canadian Music Week in Toronto. Making quite the impression in Canada, the combo subsequently received an invitation to perform at the renowned Montreal Jazz Festival in July 2019. In 2019 they released their fourth album “HEARTBEAST”. In 2020 it's time for a a LIVE LP!!!